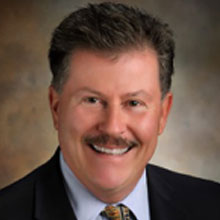 He has tried fifty eight (58) civil jury trials to verdict in eight counties during his thirty plus years as a lawyer including one where he obtained a judgment in excess of $500,000 for a client in Los Angeles County Superior Court following an eight day jury trial in a same sex harassment discrimination case against the law firm Proskauer Rose LLP, one of the U.S.’s 50 largest law firms.

In a 2006 case in a San Joaquin County Superior Court case entitled the Chargin v. Stockton Port District. Mr. Adams was hired by the Port Commission as trial counsel in what turned out to be a three month jury trial involving nineteen plaintiffs who claimed 7.5 million dollars in damages resulting from the Port’s alleged maintenance of a nuisance. The jury returned 38 defense verdicts on behalf of Mr. Adams’ client.

Mr. Adams again represented the Stockton Port District in Federal District Court in Sacramento and obtained a $600,000 settlement against one of the Port’s insurance carriers, CNA who denied a covered claim.